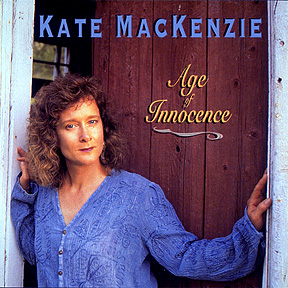 Kate MacKenzie is a Grammy-nominated vocalist with an expressive, honeyed voice and eloquent phrasing that has influenced vocalist for years.  It’s a voice that’s as much at home in an amphitheater as it is in an intimate club.  Her Grammy-nominated album Age of Innocence is a quintessential album for the folk connoisseur with its fresh original songs, creative covers, and skin-tingling takes on traditional tunes.  The songs have a depth and a richness that shows her strength as a songwriter, as well as a vocalist.  The playing on the record is crisp, clear, hot and sweet.  Exactly the kind of instrumental prowess you’d expect from such an accomplished group of musicians.

Kate emerged as a solo performer, but her roots in bluegrass go back more than twenty years.  For fifteen years Kate sang lead vocals with the upper Midwest’s premier bluegrass band Stoney Lonesome, with whom she recorded six albums.  She has also been a favorite guest on Garrison Keillor’s A Prairie Home Companion since the program’s early days.  She started on the show with Stoney Lonesome and eventually became one-fourth of the Hopeful Gospel Quartet with Keillor and Robin and Linda Williams.  Kate has appeared on the show as a solo artist and on a couple occasions has served as co-host.  Kate’s work with Keillor not only brought her before a radio audience of several million, it has also taken her to the stages of Austin City Limits, Carnegie Hall, Radio City Music Hall, Nashville’s Ryman Auditorium, the Universal Amphitheater, and the Hollywood Bowl.

Kate’s performances bring an uncommon bluesy edge to bluegrass.  She describes it best: “I feel like I’m staking out my own territory, my own version of bluegrass, mixed with country blues and honky-tonk, and filtered through a kind of rootsy swampy beat.  I call it ‘swamp grass.'”